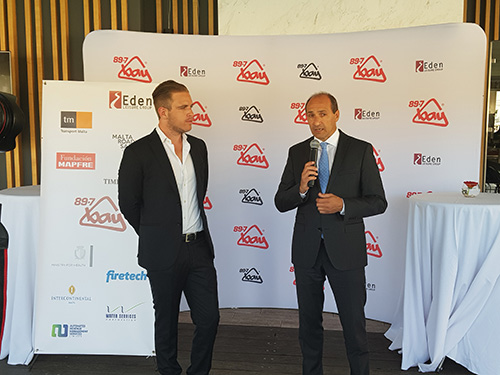 On Friday 23rd June, 89.7 Bay announced the launch of #putitaway. This nationwide campaign is an initiative to make Malta’s Roads safer by creating awareness on the dangers of using a hand held phone whilst driving.

Despite it being illegal to use a handheld phone at the wheel since 2003, each month an average of 2,000 motorists are fined for using phones while driving putting themselves and others at risk. With people’s growing dependence on mobile phones, the numbers are only increasing year in year out as shocking statistics from Malta Police show that the number of motorists using their phone last year was 153 times higher than the number of drunk drivers. A total of 8,282 people were caught on the phone behind the wheel in 2015, an astonishing 81 per cent increase over 2013. In an effort to reduce these numbers, in March 2016, the penalty for using a hand-held mobile phone in Malta increased to €100.

Research shows drivers are four times more likely to be in a crash if they use a phone, reaction times are three times slower when texting and driving with a handheld phone when compared to drink driving, and a split-second lapse in concentration could result in a crash. This Summer 89.7 Bay is determined to make the Maltese roads safer by encouraging motorists to avoid using handheld phones while driving with the #putitaway campaign.

At the press conference, Mr Kevin Decesare, 89.7 Bay station manager stated “As Malta’s number one radio station, we feel we have a duty to our listeners. Our aim with the put it away campaign is to remind them that using a hand held phone in the car is illegal, and texting while driving may lead to devastating effects. The campaign will run throughout the Summer months as a constant reminder to put the phone away before starting the engine.”

We also hope to persuade them that texting while driving is especially bad.

As part of this campaign, an informational website has been set up: www.putitaway.com.mt. The website gives the aims of the campaign, highlights the dangerous impact texting and driving has on a motorist and urges drivers to avoid using their handheld phones.