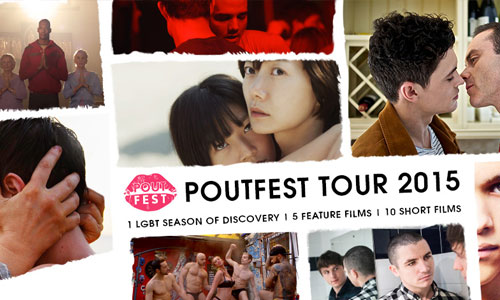 As part of its Side-Street Film concept, exhibiting alternative and non-mainstream films – The Eden Cinemas’ is proud to present the first of its kind at their theatres: the LGBTIQ film festival ‘Poutfest Tour 2015.’ The Pout tour is a 1 week film festival exhibiting films focussing on LGBTIQ themes.  It will kick off on the 11th of November and run for 1 week exhibiting series of contemporary, socially challenging and eye-opening movies.

Films to be exhibited include:  52 Tuesdays; Soft Lad; Dressed as a Girl; A Girl At My Door; Futuro Beach; Trick & Treat (a collection of 10 new, award winning short films)

As part of the festival, Eden Cinemas will also be organising on-screen Skype interviews with directors and cast members of the movies.  The audience will be given the once in a lifetime opportunity to interact with them and discuss the movie and the concepts behind it.

Over the last couple of years, Malta has seen a great improvement in LGBTIQ rights, however there is still a great deal more to be done.   Through the film festival, Eden Cinemas endeavour to provide a significant chunk of the Community with film product which is relevant to them; help defeat stereotypes through demystifying the realities that people within the Community go through; and through its association with the Allied Rainbow Communities, help raise awareness about HIV and help raise funds towards its treatment.  Eden Cinemas shall be working hand in hand with government ministries and various NGOs and LGBTIQ support groups for the week-long festival.

In her reaction Minister for Social Dialogue, Consumer Affairs and Civil Liberties Dr Helena Dalli said: ‘Laws are important, but they are not enough. It is when all of us open our hearts and minds to the realities around us that we can all progress towards a more equal society, together.’

The premiere, on the 11th November will feature the “groundbreaking new film,” (Huffington Post) 52 Tuesdays.  Those attending will enjoy complimentary drinks and canapés as well as a Skype interview with the famed director, Sophie Hyde.  Tickets will be priced at €10, of which €3 will be donated to Allied Rainbow Communities, who will use the money for HIV treatment & awareness building.

Eden Cinemas expect that this festival will be the start of many film festivals, giving the chance to patrons to enjoy unusual or alternative movies which would otherwise not have the opportunity to be exhibited. Aside from the premiere, tickets for each movie are at €7 and can be purchased from www.edencinemas.com.mt.

The event is supported by the Ministry for Social Dialogue, Consumer Affairs and Civil Liberties, the Parliamentary Secretariat for Health, and the Malta Film Commission.