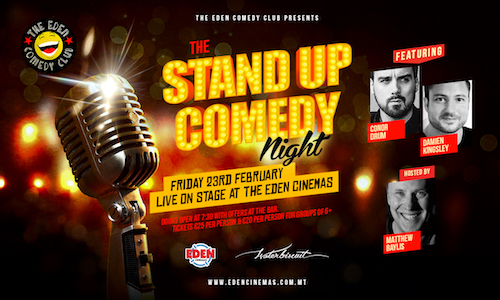 Join the Eden Comedy Club for its 18th Stand Up Comedy Night featuring three hilarious acts on Friday 23rd February at 8.30pm, at the Eden Cinemas.

Audiences are in for treat, with the headline act Damian Kingsley. Stylistically, Damian tells punchy, joke-packed stories and shorter anecdotes rooted in his personal experience. His persona wavers from cheeky and personable to irritable, deadpan and is, at times, borderline sociopathic. This unique mix of traits has led to a strong and distinctive comic voice. In 2016 he did a 120 gig tour with no money or transport, from Land’s End to Edinburgh for the bad housing and homelessness charity, Shelter, raising over £17,000.

Irish comic/actor Conor Drum , will also be taking the stage. Conor has appeared on both the RTÉ and the BBC’s New Comedy Awards and has performed around the world, from Barcelona to Los Angeles. He has received raving reviews describing him as a “A skilled raconteur” (Mumble Comedy) with “Very shrewd observational humour” (BroadwayBaby.com).

Last but not least is MC Matthew Baylis. Matthew has travelled the globe with his own unique brand of unashamedly middle class comedy, sharing stories of growing up and getting old in the leafy suburbs of middle England. As a father of six he draws much of his humour from tales of parenthood which ring true with audiences of all ages. With more than half a decade on the comedy circuit Matthew has gigged with some of the best from the UK comedy circuit, including Harry Hill, Milton Jones, Andy Parsons, and many others.

Doors will open at 7.30pm, an hour before the show starts, with great offers at the bar.

Tickets are priced at €25 per person and at €20 per person for bookings of 6 people or more. Tickets on sale soon!

For tickets and more information please visit edencinemas.com.mt or call on 23710400.