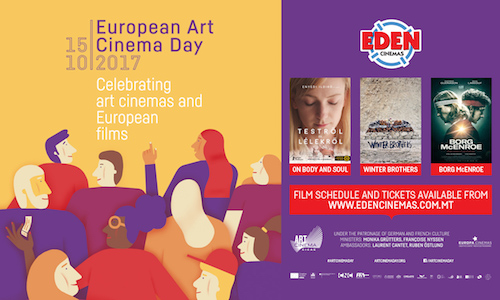 On October 15th, 2017, Eden Cinemas is celebrating the second European Art Cinema Day with the rest of Europe. The CICAE together with Europa Cinemas, has teamed up with more than 1000 cinemas to present a curated programme of European films showcasing the cultural diversity of European productions.

The event was successfully launched in 2016 where more than 300 theatres across Europe participated, and this year’s activities are joined by Eden Cinemas!

The film schedule for the European Art Cinema Day this Sunday, 15th October:

An unusual love story set in the everyday world, based around the duality of sleeping and waking, mind and matter.

A brother odyssey set in a worker environment during a cold winter. We follow two brothers, their routines, habits, rituals and a violent feud that erupts between them and another family.

The story of the 1980s tennis rivalry between the placid Björn Borg and the volatile John McEnroe.