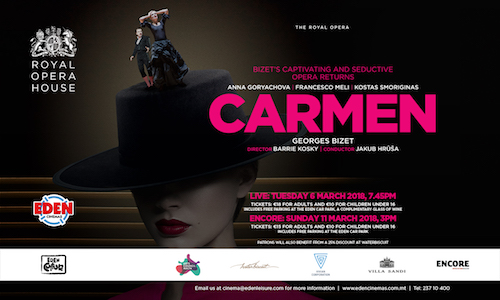 The Royal Opera presents Georges Bizet’s Carmen – one of the most famous and popular operas ever written – live at Eden Cinemas on Tuesday 6 March at 7.45pm in a new production by Australian director Barrie Kosky, first seen at Oper Frankfurt in 2016. An Encore show will occur on Sunday 11th March at 3pm.

Barrie Kosky made his highly successful Royal Opera debut in 2016 when he directed Shostakovich’s The Nose – a surrealist satire that was greeted with delight.

Combining passion, sensuality and violence, Carmen proved too shocking for the audience on its 1875 premiere and the opera was initially a critical failure. In spite of this, the popularity of such arias as the Habanera and the Toreador Song helped Carmen become one of the best loved operas, being performed more than 500 times at the Royal Opera House alone.

The story charts the troubled relationship between the naive young soldier Don José and the fiercely independent gypsy girl Carmen, which when poisoned by jealousy, reaches a tragic conclusion. Kosky’s far-from-traditional staging gives this timeless story of passion and revenge a fresh perspective. This production draws on the theatre styles and conventions of opéra comique, operetta, revue and vaudeville that inspired Bizet when creating the work. It also incorporates music written by Bizet in the original score, which was then not included at the premiere and has not been heard since.

For those unable to attend the live show, an encore screening will be held on Sunday 8th October at 3pm. Tickets are priced at €15 for adults and €10 for children, including free parking and 25% discount at Waterbiscuit.

The next opera production in the 2017/18 ROH Live Cinema Season is Verdi’s Macbeth on Wednesday 4 April.

For tickets, visit the Eden Cinemas Box Office or www.edencinemas.com.mt