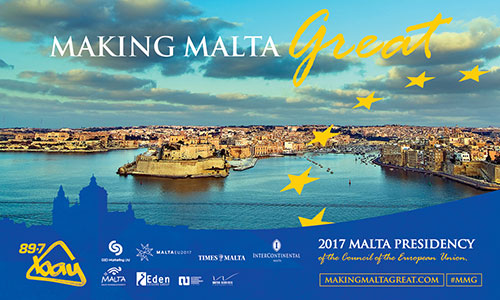 The Maltese presidency of the EU will see Malta truly come of age. It is a real chance for the country to leave its mark on the rest of Europe at a time of great change in the world. This comes at a very challenging time, when the very existence of the EU is being put to the test.

Brexit, the economic crisis, Mediterranean migration, security and terrorism are constantly in the news. However, the Malta Presidency of the Council of the EU aims to highlight the benefits and support that countries receive once forming part of the union. Despite being the smallest nation in the EU, Malta has an ambitious and exciting to-do list that it hopes will bring the EU closer to its people. These include managing migration, boosting the single market, improving security, building a better society, our neighbours, the sea and much more.

Owned and operated by Malta’s leading entertainment company, Eden Leisure Group and with the largest percentage of radio listeners on the island and almost 1,000,000 Facebook fans, 89.7 Bay has the reach to make a difference locally and get Malta further recognised and talked about internationally. As part of this campaign, an informational website has been set up: www.makingmaltagreat.com

The website breaks down different aspects of the EU presidency, and what difference this will have on Malta and the Maltese Islands.

This campaign has the support and backing of The Malta Presidency of the Council of the European Union. It has been organised in collaboration with The Times of Malta, The General Soft Drinks Co. Ltd, Water Services Corporation, the Automated Revenue Management Services ltd, Intercontinental Malta and the Eden Leisure Group.