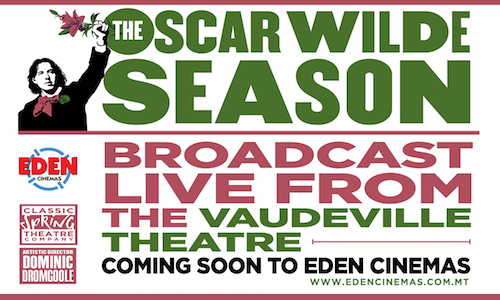 Staged by the Classic Spring Theatre Company, the Oscar Wilde Season will be broadcast live to Eden Cinemas from the Vaudeville Theatre in the heart of London’s West End. Opening with the live broadcast of A Woman of No Importance on 16th March, the season will continue with the celebrated Lady Windermere’s Fan on 8th June, followed by An Ideal Husband and The Importance of Being Earnest later in the year.

Classic Spring is the new theatre company from Dominic Dromgoole, former Artistic Director of Shakespeare’s Globe. The company’s first season is a year-long celebration of the late genius Wilde, one aiming to provide a much fuller picture of the man and the artist, revealing this much-loved but complex playwright as the brilliant renegade he was in his own time.

Multi-award-winning actor, director, comedian and playwright Kathy Burke will then direct Lady Windermere’s Fan, bringing together a talented comedic cast including the Olivier Award winning actress Samantha Spiro as Mrs Erlynne, Kevin Bishop as Lord Darlington, and guest starring Jennifer Saunders as the Duchess of Berwick, marking her return to the West End stage for the first time in over twenty years.

Dominic Dromgoole, Artistic Director of Classic Spring, comments: “Oscar Wilde was a lover of the modern in all its forms, and I’m sure the idea that his plays could now be broadcast live to so many people, in so many places, would have delighted him. We are very pleased that these glorious plays are going to reach an even wider audience and have life beyond their runs in the West End.”

For more info on the Oscar Wilde Season, visit www.edencinemas.com.mt or call 23710400.