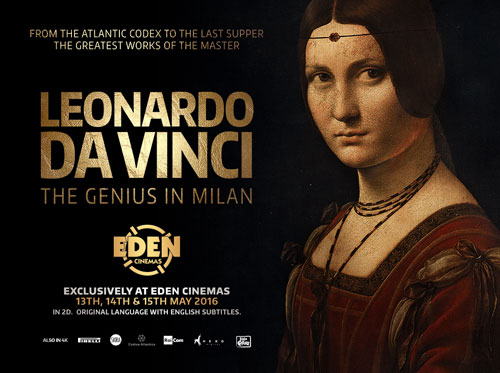 Surpass the spirit of time through the film documentary dedicated to the recognised genius that is Leonardo Da Vinci, in Leonardo Da Vinci – The Genius in Milan. Discover the story of the years spent by the Renaissance Artist in Milan, exclusively at Eden Cinemas from the 13th to the 15th of May.

He was a painter, sculpture, scientist, anatomist, botanist, architect and much more. It was for this reason, as well as for his many other talents, that during the Expo months, the city of Milan chose him to be the symbol of hope for Italian Renaissance. One of the most significant initiatives during the Universal was the ‘Leonardo da Vinci 1452-1919’ exhibition, which present many of Leonardo’s masterpieces to the public.

The decision for Rai Con, Skira and Codice Atlantico to work together on this film project, sparked from a desire to showcase how Leonardo had significant impact on life and art, and on many legends that surrounded him. By involving Pietro Marani – the curator of the exhibition – and some of the leading worldwide experts on Leonardo, they created a story that could open new perspectives, and reveal extraordinary worlds. How can the complexity of absolute genius be recounted? What mystery makes Leonardo the world’s most beloved artist? To answer these questions and develop the subject further, authors James Ghilardotti and Gabriel Scotti saw fit to enrich the documentary narrative, developed with director Nico Malaspina, by adding some fictional scenes that were directed by Luca Lucini.

Marani’s story, expert contributions and additional fictional scenes led the project beyond the frames of the exhibition to take in the whole city, thus turning the numerous Leonardo’s settings into film locations: the Sforzesco Castle, the Museum of Science and Technology, the Basilica of Santa Maria delle Grazie, the Navigli canals.

Leonardo is screened in Italian with English subtitles.

For more information and tickets call us on 213710400 or visit edencinemas.com.mt