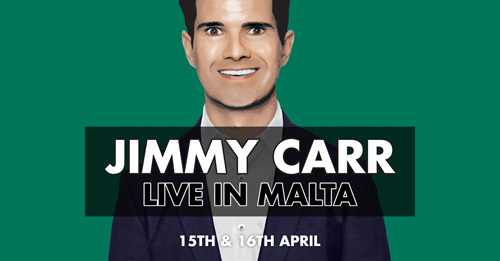 World-famous and voted as The UK’s 2nd favourite comedian, JIMMY CARR will be performing in Malta for 2 nights only , exclusively at InterContinenantal Arena & Conference Centre (formely the Bay Arena) on the 15th and 16th of April.

The award-winning comedian is the most-respected and best-loved comedian working in Britain today. Jimmy is one of the biggest selling live acts in the UK, performing for over 1.5 million people!

His latest tour Funny Business has seen him perform to over 300,000 people in places such as Australia, Canada, South Africa and throughout Europe. Live comedy is what Jimmy does best! In this brand new stand-up show, Funny Business, he promises to be funnier and ever more outrageous than ever! It is a chance to see Jimmy doing what he does best!

Although live stand-up is his expertise, Jimmy is never off the telly. His TV credits include 18 series as host of panel show 8 Out Of 10 Cats, 10 years as a host of Channel 4’s Big Fat Quiz of The Year, and appearances in The Royal Variety Performances, plus many more.

Customers can purchase their ticket directly through our ticketing partner Showshappening.com, through edencinemas.com.mt or at the Eden Cinemas Box office.

‘A comedy hero for our times’

‘King of the comedy fringe’

‘Fabulous: Carr is No1 on the Comedy Offenders’ List’

‘A wonder to behold…he plays with your boundaries, but you love it. If Jimmy Carr can do to a body what he does to a mind, then his girlfriend must be the happiest woman on the planet’

‘The brightest British comic hope for a long, long while…the most deliciously transgressive comic…he is not so much pushing the boundaries as sailing in uncharted waters…Superb’

‘A masterclass in comedy…devastating, tasteless two-liners that are bliss to listen to…Carr’s persona is irresistible and his wisecracks have you quivering with satisfaction’

‘Edinburgh punters and critics disparage comedy acts with the phrase, ‘It’s not quite Jimmy Carr, is it?’ His exquisitely economical and perfectly-timed one-liners have set the new standard’

‘One of the most polished performers in the business’

Eden Leisure ends the year with some innovative CSR activities

Guthrie Bridge Restoration Set to be Completed early next year