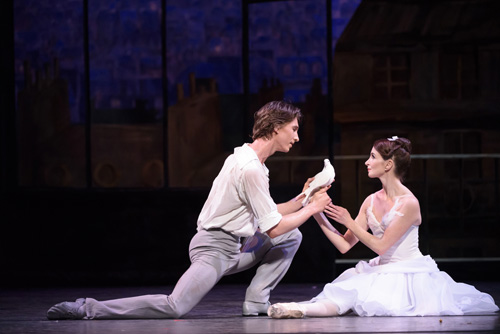 Live from London’s Royal Opera House to Eden Cinemas’ on the 26th of January at 8.15pm, are two outstanding ballets performed by The Royal Ballet. Exclusively showcasing Frederick Ashton’s work that defined the English style of dance. In this double programme, the Company celebrates Ashton and his legacy in two of his contrasting works.

One of Ashton’s final works, Rhapsody was created in 1980 as a virtuoso conclusion to his series of non-narrative ballets. It was created on the acclaimed Russian dancer Mikhail Baryshnikov, instilling his personality as a celebration of the male virtuoso at the heart of the work. The male Principal role is characterized by exceptionally fluent leaps, turns and lightness of movement. However, Ashton also endows the Principal female role with choreography of breathtaking clarity and speed. The strength and grace of the ballerina are depicted through the role created on the pure, fleet-footed style of former Royal Ballet Principal Lesley Collier.

Not seen or performed at the Royal Opera House since 1985, The Two Pigeons (1962) is a quintessential Ashton work. He explores the nature of love in one of his most charming, elegant and moving works, through a young man blind to the value of what is right in front of him.

Lynn Seymour and Donald Britton created the roles of the central pair (though in the premiere Christopher Gable danced the male role, taking over for an injured Britton). Ashton’s choreography draws a strong division between the uninhibited sensuality of the gypsies and the lovers’ interactions, which often – to both comic and heartfelt effect – suggest the movements of birds.

Tickets for the double bill are available at a fraction of the overseas prices. Each ticket is €18 per adult and €10 for children aged 16 and under. Making the evening that more special, the audience will be offered a complimentary glass of wine and complimentary parking at the Eden car park. An encore performance will be held on the 31st of January at 3pm. Tickets will be priced at €15 for adults and €10 for under 16s.

The event is sponsored by Attard and Co., 35 South and Waterbiscuit.

For more information and to purchase tickets visit www.edencinemas.com.mt/